I posted this a month or two ago, on my Wordpress installation, but after switching to Blogger, I figured I would repost it. Enjoy.

Frankly, I'm amazed that this feature doesn't already exist, knowing that Google Maps has seen a steady increase in the number of locations that now have listed store hours. However, as much as I hope for this feature, it doesn't seem to exist, or be in the works. Anyways, here is an outline of my idea:

1. Search by Business Hours:
This could have multiple different implementations, but how I see it best being done is through two ways. The first way would be a checkbox near the search bar that says "only include known open locations in my search". Checking this box and then running a search would only return results that are known to be open at the time the search is performed (meaning the system would have to account for timezone of searcher's location and other variables, but I don't see this being that difficult). The other way that this should simultaneously be implemented is by a custom set of search filters that use open hours to sort results, such as a field for only searching for places open from "___ hours from now" or "open from ____ to ____", allowing users to set custom periods of time in which they want the location they are searching for to be open. For example, right now I am trying to find a coffee shop to do work at until 10pm tonight. Currently, I have to scroll through search result after search result and look up hours to find one that is actually open, but with the new system, I could type in the query "coffee" and set the filter to "open from now to 10pm". I would imagine this would also be useful for people bar-hopping, studying, eating out, etc.
Although I considered it, I didn’t produce a mockup for this idea because I believe it is rather self-explanatory and the GUI for this wouldn’t be more than a few extra text fields, radio buttons, and various other elements on Google Maps page.

2. Trip planner
I don't need this feature as much as my first, but I still think it would be useful, especially to those in an unfamiliar area, such as when on a vacation. How this would work is through a link on the main page of google maps that says something like "trip planner' and when clicked, takes you to a subpage of Google Maps. This new page would have many different custom fields that could be filled in with custom queries, times, and various other assorted variables, such as daily budget (could be something like $, $$, or $$$, mirroring the usual system of cost rating used with mapping sites). Then, after filling in the fields and hitting submit, the system would find a plan that best fits the inputted information. This seems like a far-fetched idea that would take years to implement, but most of the information this program would require is already in use by Google Maps. For example, a family on tour in New York could say that they want something related to "Museums" to do from 10 AM to 1 PM, in the $-$$ range, and within 30 miles of their hotel in Times Square. The system, already knowing the keywords, hours of business, location, and even associated price, might spit back "Ripley's Believe it or Not! Times Square" as a possible choice (check out the maps page, it actually matches my hypothetical scenario). Then, after seeing the results, which would give multiple options for a single time slot, the user would pick the one they like most, maybe after sorting by reviews or proximity, and then that location would be filled into that slot. After picking locations for all slots inputted by the user, they could save the day plan to their Google Account, email it to family members or friends, post to a social website, or print out to carry with them during their trip. Furthermore, if Google wants to make extra revenue with this feature, they could have promoted locations based on the users query and charge businesses for the ability to promote themselves. Taking things even further, Google could take advantage of their newly acquired ITA Software technology to allow users to also plan air travel and include it as part of their travel plan and a cost estimation feature.

I could also see the release of an Android application to accompany this idea being beneficial to its success. Users could perhaps use the app to sync trips, edit them on the fly (good for unplanned problems or delays), and perhaps even the ability to interact with other phones with the app. For example, if everyone on the family has the app, a parent could use a feature to sync the travel plan to all members of the family and keep them updated if things change.

Below is a mockup design of the editing page I have in mind for the trip planner. I used the Opensource Pencil Project powered by Mozilla to create the prototype (http://pencil.evolus.vn/en-US/Home.aspx). Various icons on the pages and maps were fetches with Google Images. 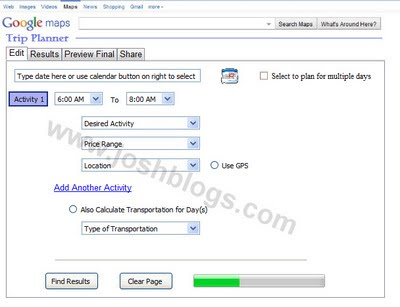 
Below is another view for the trip planner, this time to see the recommended results and select your final choices 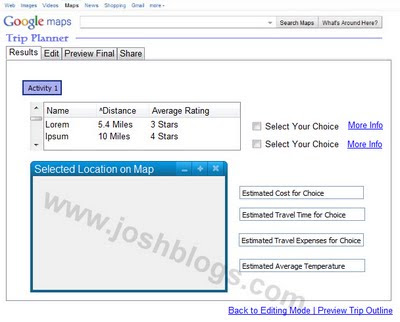 
Below is the page that shows the user an overview of the entire trip (all locations, times, directions, etc) 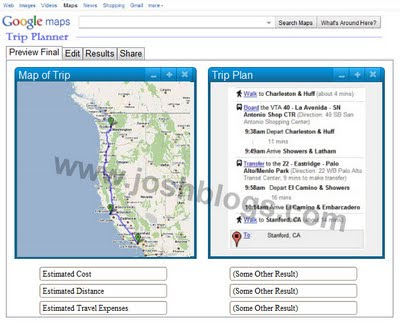 
Finally, the below picture is a mockup of the sharing screen, to which users could use to print out the plan, email it to others, share on various social sites, and perhaps even send it to a hypothetical mobile application. 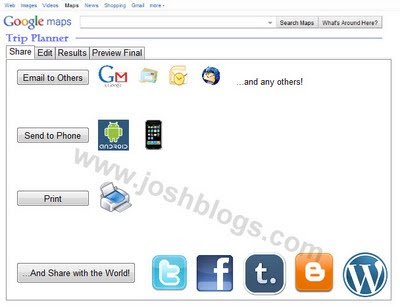 Click on the above image for a larger version.


Anyways, this concludes my idea; I hope you enjoyed it. If you feel like I do, and feel very strongly that this needs to be implemented, share this on what every sites you want to and try to get it popular enough so that Google takes notice. Contrary to popular belief, Google does actually care about what its users have to say and they often read user forums and implement new features based on user input.
If you have any ideas for me or comments, either leave them below or contact me via email here: joshblogs.com@gmail.com
Posted by Joshua T at 10:00 PM No comments: Links to this post
Email ThisBlogThis!Share to TwitterShare to FacebookShare to Pinterest
Labels: Google Maps, google maps itinerary, google maps route planner, Google Maps Trip Planner, google route planner, Google Trip Planner, prototype, repost

After a dispute with my previous host, I decided to terminate my contract early, but I've been reluctant to sign up with a new host since. That's why, after some consideration, I've decided to try out Google Blogger, because it allows me to host through Google at no cost to myself (except the money I paid for the custom domain through Namecheap). In addition, so far Blogger seems to have lots of excellent themes, a wonderful GUI, allows for ads, if I ever chose to add them, and allows publishing from mobile devices! Anyways, I'll be posting lots of stuff soon, and probably some stuff from my old wordpress installation, so stay tuned!

PS: If you use Namecheap and are wondering how I am hosting my Blogspot with a custom domain through them, check out this guide: CLICK HERE

The guide doesn't really mention this, but the button "All Host Records" will not even show up if your current nameservers aren't already set to the Namecheap default. To do that, under "Domains" and "My Account", click on "Manage Domains". Then click on the domain you want to switch the nameservers for, and on the left hand navigation, you should see a button that says "Transfer DNS back to us". Click on it, follow the prompt, and blam, nameservers will go back to namecheap. However, keep in mind that the time it takes to transfer nameservers seems to be completely random, not just with namecheap, so be patient during all of this.
Posted by Joshua T at 10:29 PM No comments: Links to this post
Email ThisBlogThis!Share to TwitterShare to FacebookShare to Pinterest
Labels: hosting, namecheap, welcome
Newer Posts Home
Subscribe to: Posts (Atom)