After spending 6+ hours looking up projectors, reviews, specs, and manuals, I finally decided on purchasing the ViewSonic PJD5133 SVGA DLP Projector. Based on my research (see below comparison chart) it seemed like the best fit for my price: it has good ratings, HDMI, high lumen output, and of course, support for DLP 3D. 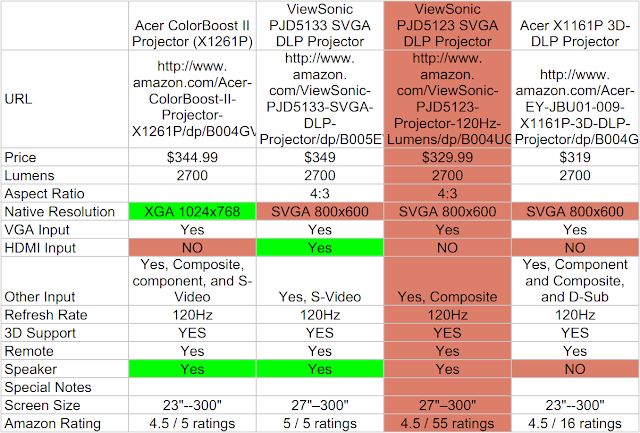 The reason why the PJD5123 is blocked out in red, is that I decided it was silly to even consider because it is basically identical to the PJD5133 except for
the lack of HDMI support, which seems like a good enough reason to pay the $20 difference between them.

Although I have had some rough times with this project over the past weeks, I finally have got everything working, and I must say this is an amazing projector for the low price tag. I thought I would regret not going for the higher resolution Acer, but honestly, even sitting just a few feet away from the projected image, I can't see any pixels or low resolution artifacts.

To get back to the problems I had with this projector, the first was with an HDMI cable I ordered. Based on its reviews and specs, I purchased a "BlueRigger High Speed HDMI cable with Ethernet (25 Feet) - Supports 3D and Audio Return" off Amazon to connect the projector to my computer. However, when I connected the two via the new cable, my projector kept saying "no signal" and wouldn't display any output from the computer. I tried messing with settings on the projector and on my computer, but to no avail. Finally, thinking maybe the cable was broken, I went to another room in our house with a brand new TV and tried using the BlueRigger cable to connect a Roku box to it. It worked! Thinking that maybe it was a compatibility issue with the HDMI version, I scoured the web to find what HDMI version the projector supported. Sure enough, about halfway down the spec page on Viewsonic's web page for the projector, in small print, it says "HDMI 1.3".

After finding out that the projector natively supports 1.3 HDMI, not the newer 1.4, I went ahead and bought a 30 foot 1.3v HDMI cable off Amazon (for link, click here). After plugging it in, I was ecstatic to find my assumption was right, as the 1.3 cable worked immediately. I also purchased a right angle HDMI adapter, so that I could have the projector against the wall without the HDMI plug bending against it. You can see the right angle adapter plug in the picture below. 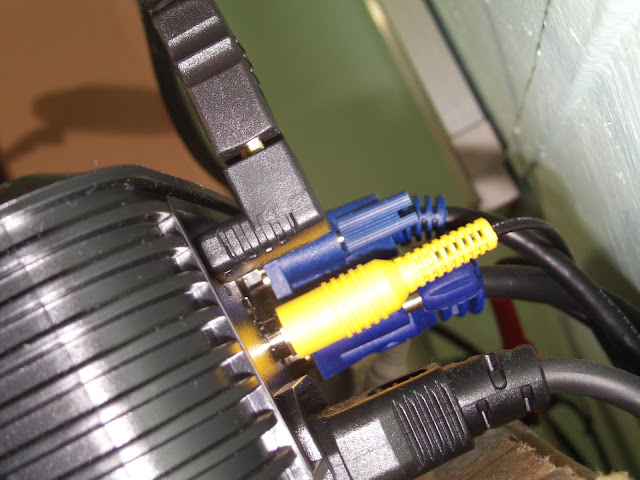 The next challenge was getting my XBOX 360 hooked up. I would have just used HDMI, but my XBOX is one of the older ones, so all it has is component output. I thought I was screwed and there would be no way to get it hooked up, until I double checked the projector manual and found a picture of component cables being plugged into a VGA port on the projector (pictured below) as well as text on a page saying the second VGA port (the bottom one) supports RGB component input. 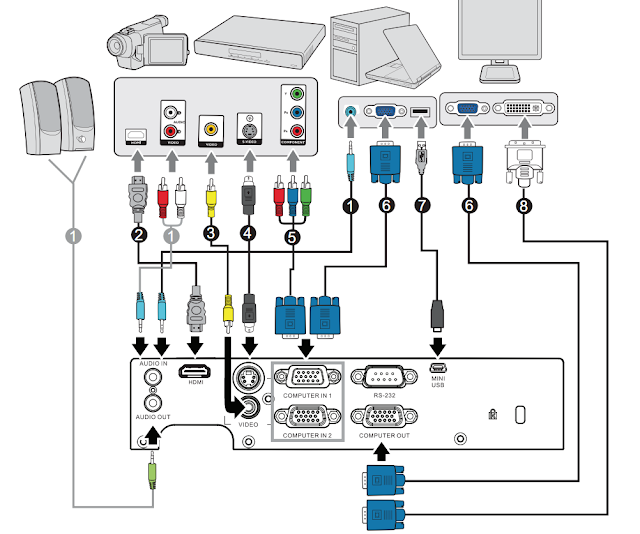 Based on this evidence, I went ahead and purchased a component to VGA converter cable on Amazon (for link, click here) for only about $7, and whadya know, it worked right away. However, since the converter cable had male component ends, and the cable from the XBOX has male ends, I had to use three female to female RCA couplers to get them connected, which you can clearly see below. For audio, instead of plugging it into the project, I use a RCA red/white to phono adapter. 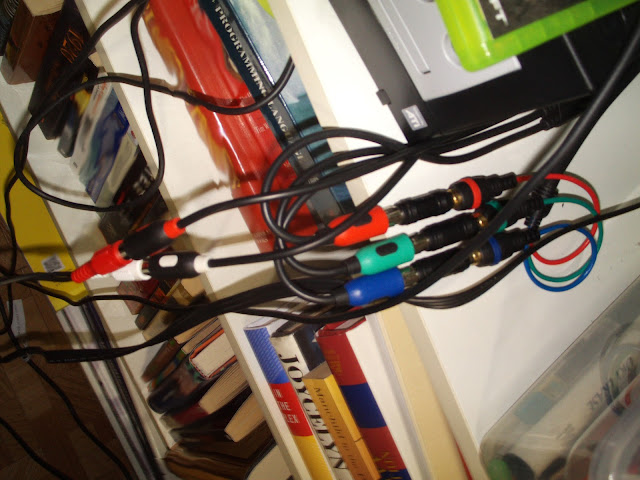 Finally, being obsessed with 3D and virtual reality, I knew I had to get 3D working to satisfy my craving for things flying out at my face. I went with a pair of Optoma 3D glasses, even though they aren't rechargeable, because they had a decent price tag, good reviews, and seemed big enough to fit over my prescription glasses. After arriving just two days after ordering them from Amazon (what would I do without my awesome Amazon Prime), I unboxed them and put them on. I got lucky, and they do fit perfectly over my large glasses; no discomfort at all! However, after putting them on, I immediately realized that I really had no idea how to actually display the 3D content. I started googling solutions and trying out software, but nothing seemed to work. The Stereoscopic Player (link) did produce an effect when playing compatible videos on my computer via the HDMI cable, but whenever I went to fullscreen mode (which is necessary to enable the 3D), the framerate fell and I ended up watching all my videos in slow-mo. Finally, after trying a whole bunch of other software, which I won't list, I came across a recommendation online for Cyberlink's PowerDVD 11. I almost disregarded it, as I remembered PowerDVD as the shitty bloatware slow player that comes pre-installed on prebuilt computers. That might have been an accurate description of the software 7 years ago, but after trying it out, I can say Cyberlink really turned things around, because PowerDVD 11 KICKS ASS. Seriously, I threw every format I had at it, and it displayed full 3D in stunning clarity. For example, I tried a 1080p SBS (Side-By-Side) MKV Imax film about the International Space Station, and it instantly detected that it was a side-by-side format, processed it as such with my ATI Radeon 5800 Series, and synced the left and right frames with my shutter glasses, all in real time, with no lag or stutter, producing an amazing jaw-dropping effect. To demonstrate how it splits the images, I created a simple picture in paint.net with a side-by-side image (the picture is below)

Then, using Tridef Media Player, another great piece of software that supports ATI and on-the-fly 2D to 3D conversion, I had the image separated into two different streams, one for each eye. As you can see below, the glasses in conjunction with the DLP link technology work wonderfully at presenting only the image meant for that eye; no headache/nausea inducing ghosting. 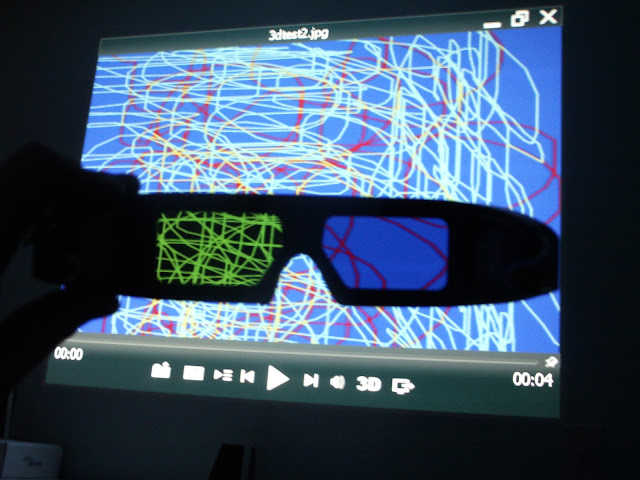 Back to PowerDVD 11, it can also convert 2D content to 3D IN REAL TIME, for both pictures and videos. Did I mention it did this in real time? No converting, no waiting, just instant 3D. It actually works well too! So far I have tried it on a few movies and TV shows, and it actually produces an effect pronounced enough to make using the glasses worth it.

As for 3D gaming, I tried out both IZ3D and Tridef Ignition and Tridef won the battle. With IZ3D, I had a lot of really freezing on my computer, a blue screen of death, and a problem where when I rebooted my computer, all I saw was a mouse cursor against a black background. The last issue was the worst, as to fix it, I was forced to go into Windows "Safe Mode", uninstall the IZ3D software, and then reboot. With Tridef, it automatically scanned my computer for installed games and software and created profiles for them, it has built in settings for many existing games out there, and also has a generic profile for real time 3D conversion of any video game! I tested it out with SWAT 4, using the generic profile, and the 3D effect was breath taking. In fact, it was more pronounced than any 3D effect I have seen in any theater ever... and I saw Avatar in 3D as well as a few movies in IMAX 3D. Needless to say, I am paying for this software once the 15 day trial period runs out. Even then, I get 50% off the price, as they offer half off to any users whose graphics card supports ATI HD3D, which the 5800 series does!

If you stumbled upon this post because you have a question about this projector, and through my long rambling page I still didn't manage to answer it, feel free to post it in the comment section below, or email it to me at joshblogs.com@gmail.com