Nuu K1 WITH ANDROID! - Trying out a bluetooth keyboard attachment with the HTC Sensation 4G

I have owned the HTC Sensation 4G since it came out (if I recall correctly, I purchased it at T-Mobile store the day after it was officially released) and have loved every minute with it. It is fast, durable, and now even has root status. However, the one thing I could never get over losing in my transition from the original G1 to the Sensation 4G was the slide out keyboard. There is just something about typing on physical keys that makes texting and composing messages sooo much easier. I have tried almost every keyboard on the Android Market and none of them, even the ones with haptic feedback, feel as comfortable as using a physical keyboard or let me type as fast. Because of this, I started looking into seeing if it would be possible to pair a bluetooth mini keyboard with the HTC Sensation 4G and attach it somehow to it. However, there are currently no mini bluetooth keyboards made for use with the Sensation, or almost any Android phone for that matter, so I figured I was out of luck. However, I kept going back to the Amazon page for the Nuu K1 Minikey and staring at the pictures and finally decided that I would take a gamble and see if this thing would fit my phone right out of the box or if I might have to modify it a little. The next day the Nuu K1 was waiting on my doorstep and I eagerly shredded the box to get to the keyboard and try it out. "Wah-wuh-wuuuuuu" music should have been playing at this point, as it clearly didn't fit my phone, no matter how hard I shoved it in there. Below is how it originally appeared, in its unmodified and unfitting form. 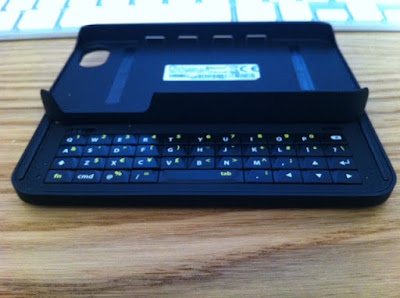 However, after spending over $50, I was not about to give up. I grabbed a power drill, attached a sanding/grinding bit, and
started grinding down the top edge (not the edge with the gap for the volume controls). I kept at it, alternating between the drill, an Exacto knife, a hacksaw, and sandpaper, until I had shaved away the edge until it was flush with the back of the holder, although not flush enough to have to ruin those staple things sticking up. Next, I ground down the bottom left little ledge of the holder (to the left of the volume keys gap) until it was flush with the body. Finally, I shaved a tiny bit off the very edge of the bottom ledge, so that it wasn't jutting so far upwards. After all this work, which took about a half-an-hour, I was left with a still-functional Nuu K1 which my Android could sit on. I added a bit of velcro to both the case and my phone, so I could comfortably remove or attach the keyboard at any time. Below you can see some images of my results. 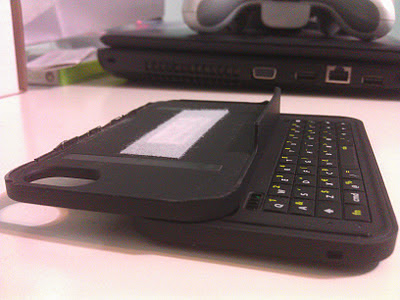 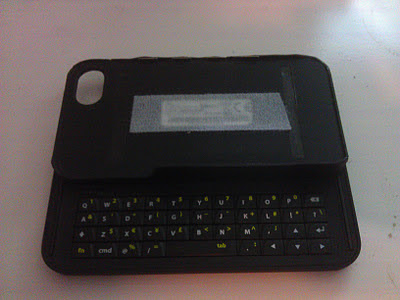 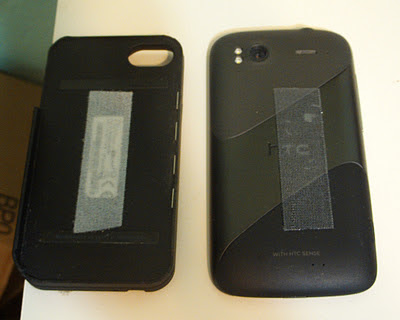 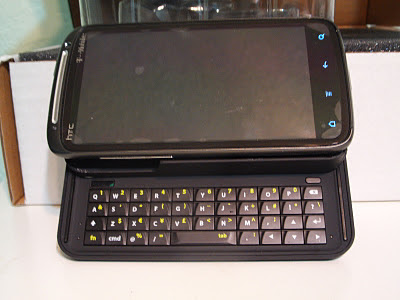 One of the things I was really worried about was whether the camera would work with the case, as I would be unable to cut a larger hole for it if necessary, as cutting into that part of the case would be cutting into the electronics and would damage it. However, as you can see below, the camera hole on the Nuu K1 actually lines up perfectly with the camera and LEDs on the HTC Sensation 4G. 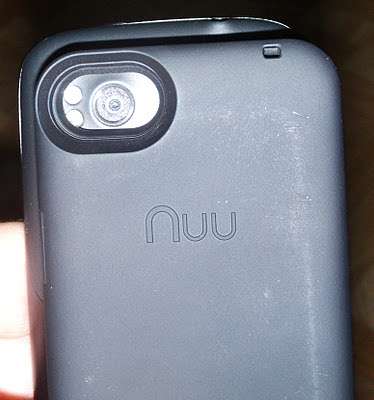 I've been using this modified keyboard with my HTC Sensation 4G for 2 days now and I love how much faster I can type now with my phone. Used in conjunction with SwiftKey X,  I now also have adjustable auto-correct/auto-completion/spell-checking. The battery life on the keyboard seems excellent as well, as have yet to recharge it and it is still running strong. The only complaint I have matches the commonly heard one on Amazon, that the backlight for the keyboard takes too long to turn on after pulling out the keyboard (it takes about 2-3 seconds to switch on). However, it really isn't a big deal, and doesn't bother me personally at all.

EDIT 4/23/2012: Someone requested that I make a video demonstration, and since this page has been getting so many hits, I decided to do a long one to share here with everyone. See it below!