I recently moved houses, from a house with a view of a dead end street and lots of trees, to a house overlooking the beautiful Lake Washington, boats, hot air ballons, stores, float planes, and at night, neon signs. Me and my dad often spend the late part of the day outside on the deck, looking across the water, and recently, he said he was wondering what the large red neon sign across the lake said. Being miles away, it wasn't readable to the naked eye; it just appeared as a bright red blur. This got me thinking; could I purchase a telescope to use for terrestrial (land) viewing, rather than just the sky? Would it allow me to see that far away (2+ miles)? After getting an Amazon gift card, I had some extra money to spend, so I purchased the Celestron 21041 60mm PowerSeeker Telescope from Amazon and got to try it out today.

Here are some pictures of the packaging, parts, and set up.

Now for the terrestrial viewing tests. Keep in mind that I was using a sub-par digital camera, without a telescope adapter, so any blur in the pictures is most likely from the camera and my poor setup - not the telescope. In actuality, I was extremely impressed by the quality of optics in the telescope - they were so clear I could read the prices on a gas station sign OVER 2 miles away! Don't take my word for it though - check out the examples below!

All pictures taken through the telescope were taken with the 20mm eyepiece (35x) and NO barlow lens! This means I was using the lowest magnification available, which makes my results even more stunning!


Wow! For a cheap $50 telescope, these results seem pretty amazing to me! Not to mention, the actual results were much better than how they look on this page - the digital camera was hard to position over the eyepiece and as a result the digital images ended up less clear than they actually were.


This was actually the first picture I tried to take with the Celestron 21041 60mm PowerSeeker Telescope, even though I listed it second here, so the results were not as good as my later tries. Even though the letter may appear blurry in the above picture, rest assured that in person I could read every letter clearly, as though the water tower was right in my front yard.

Example 3: Powerline about a block or so away (daylight)


WOW! So not only does this telescope work great looking at tiny details miles and miles away, but it also is great for focusing on objects close to the viewer! Needless to say, I was very impressed. Without even squinting, I was able to very clearly read the numbering on the pole and even get a good picture with the digital camera, even though I don't own a telescope digital camera adapter. 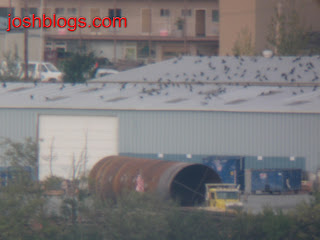 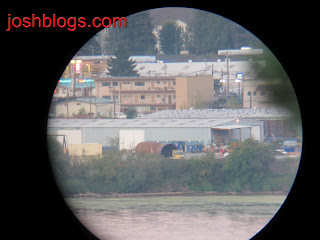 I can read gas prices from the Safeway gas station 2.2 miles away! Now no one can stop me from making bad jokes about the high price of fuel! 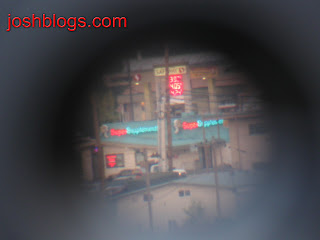 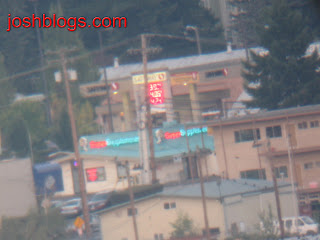 What about sky viewing?

Well, to be frank, I bought this telescope (Celestron 21041 60mm PowerSeeker Telescope) mostly for terrestrial viewing, and plan to barely every use it to look at stars and the moon. I did try looking at some stars last night, but I had some trouble and wasn't really in the mood to deal with anything complicated. The main issue is that to see far away objects, you have to use the barlow and the higher powered lens, but doing so makes the image dimmer and smaller to see. In addition, when you are looking at something with near 100x or higher magnification, the slightest touch, even the wind, can make the telescope shake a little, moving the object you are observing completely outside the view of the telescope. My suggestion; if you are planning on using this telescope for sky viewing, you must have a lot of patience, very little polluting light, and good vision. Otherwise, I would suggest spending extra and getting a really good scope. That being said, if you are at all interested in terrestrial viewing, this scope is EXCELLENT and a steal at the current price.

If you are interested in other ways to view far away objects, don't forget about binoculars and spotting scopes. In fact, as I have not tried them, I have some suspicion that some of them might be better suited than this telescope. Primarily, I feel they would be better because this telescope goes from a 35x magnification lens to a 175x magnification lens, not offering much room in between for objects that are much further than a few miles away, but a lot closer than the moon. Binoculars and spotting scopes on the other hand usually offer a magnification range, with a dial you can use to fine tune your magnification, usually between 20x and 60x. Also, since both binoculars and spotting scopes are designed for terrestrial viewing, you don't have to worry about whether or not they are refractors or if they have diagonals (to make the picture right side up), but they tend to be less powerful for more money, so be careful what brand and model you buy. To see around 2 miles, you probably want something in the 30x and up magnification range, so keep that in mind too. Lastly, in optics, bigger pretty much always means better. The bigger the objective lens, the more light comes in, the clearer and more defined your view is going to be. On scopes and binos, the naming method is usually "zoom range x objective", so a binocular might say "20-60x60", which means it has a zoom magnification range of 20-60x and an objective lens of 60mm.

If you want to see a list I created of some of the best-rated spotting scopes, low-priced telescopes, and binoculars, check out this Amazon wish list

. However, I would really recommend searching some more for yourself, so you can find the product that will best fit your needs.


I hope you enjoyed this post (it was a long one)! As always, if you have comments or questions, feel free to comment below, or send an email to: joshblogs.com@gmail.com. Thanks again for checking this page out!