After enabling VR for a tour that I recently made in Kolor Panotour I noticed that several hotspots were missing in the tour when using the VR mode, but were there when using the normal viewing mode. I quickly stumbled upon this thread on the official Krpano forum that made me think maybe my hotspots were not being set as "distorted". I was quickly to able to verify that this wasn't the case, by examining the special VR XML file that PanoTour creates in the output folder - the distorted="true" flag was indeed correctly set on hotspots.

However, in inspecting the VR XML file, I found that not only were the missing hotspots not present in the VR XML, neither were the entire panoramas that they were linking to! I was thoroughly perplexed and spent quite a while screwing around with various settings to no avail. Finally, I found my answer and facepalmed myself I may now have a blister; I missed the fact that PanoTour only supports FULL 360x180 scenes for VR - as per this extremely relevant note from a page on their site about VR mode:

Whew! Easy fix! On scenes were the source file is not a full 360x180, just tell the program that it is (simply change the "Horizontal" to "360" and "Vertical" to "180" when you have a scene selected > Settings (sidebar) > Projection > Input Field of View"). After I did this to all my scenes, all the missing hotspots reappeared in VR mode as well as the full scenes they are linked to. 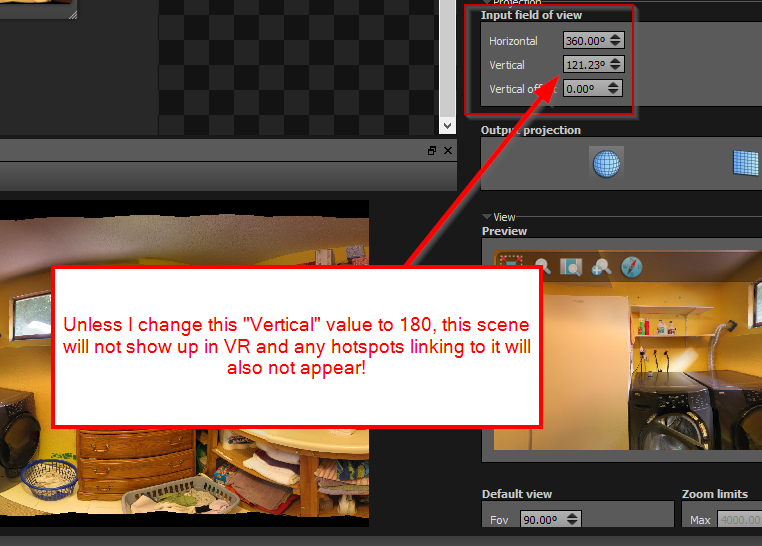 The only way this really affects output is now you can't have cropped panoramas where, if for whatever reason you wanted to exclude the very bottom and top of your source file from showing (perhaps because it isn't there to start with), you can't. If it simply isn't there, the program simply fills in the space with black (I'm sure you have seen this before in virtual tours before, where instead of gracefully masking out a tripod, the editor has simply left a big gaping black hole.